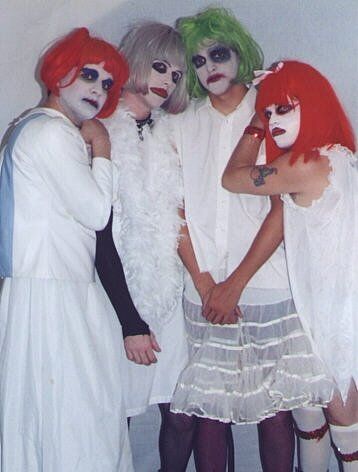 The Frankenstein Drag Queens From Planet 13 were formed shortly after Maniac Spider Trash disbanded. This band had many lineup changes over the years with 13 the only member to have never been replaced.

FDQ released five studio albums and six EPs and broke up in 2001 when Wednesday 13 left to perform vocals with the Murderdolls, the band reformed for a brief reunion in 2005 releasing a box set containing their entire recordings.

Frankenstein Drag Queens from Planet 13 are a horror punk band from North Carolina. The band was formed in 1996 by Wednesday 13, who recruited friends and former Maniac Spider Trash bandmates Seaweed and Sicko Zero. The band's history is riddled with a 'revolving door' lineup with 13 the only member to have never been replaced.

After breaking up in 2001 when Wednesday 13 left to perform vocals with the Murderdolls, the band reformed for a brief reunion in 2005 releasing a box set containing their entire recordings except for the track "Look Mom I Killed A Chicken" because Wednesday 13's master copy was "destroyed beyond repair" this track exclusively available on the 197666 7 inch LP and the band-released "Chop of My Hand" CD-R.

The music of the Frankenstein Drag Queens was played in a punk rock style. Lyrically the band were inspired by horror B-movies and references in popular culture. As well as a large leaning towards punk the band's live show and appearance took cues from glam rock acts such as Alice Cooper, New York Dolls and KISS. They were known to wear dresses and make-up on stage as part of their performance.

1996 The band wrote their debut album "The Late, Late, Late Show" within two weeks of being together, and recorded it in two days. The album contained 11 tracks of nihilistic but trashy, horror punk tracks. This would be the blue-print for their future recordings. Lyrically the album featured songs about killing Miss America, religion, rape and horror movie themed such as a song mentioning The Wolf Man.

By the end of 1996, 13 fired Seaweed from the band, Rat Bastard took his place. Soon after, Sicko Zero quit the band and 13 lost contact with Rat Bastard and the band folded.

1997-98 The following year in 1997, the Frankenstein Drag Queens from Planet 13 reformed. Seaweed returned to the line-up and brought a guitarist named Creepy and drummer named Scabs with him. The latter two only remained with the band for two weeks however.

Abby Normal previously of Maniac Spider Trash and drummer R.S. Saidso joined the band. Along with 13, the 3 recorded and along with Saidso, 13 co-produced the Frankenstein Drag Queens cassette released demo EP. This cassette was sent to record labels and sold at live shows with a free FDQ sticker.

Syd replaced Abby Normal the same year on guitar and after a tour related inter-band conflict R.S. Saidso was fired from the band.

In 1998, original drummer Sicko Zero rejoined and the band set to record their second album "Night of the Living Drag Queens"

This album and the one previously recorded, were released via the band's own label Uncle God Damn Records, and were made available by mail order and at their gigs.

After touring in support of the album, guitarist Sydney left the band. 13 then decided to keep the band a trio which ironically had returned to its original form; Wednesday 13 on guitar and vocals, Sicko Zero playing the drums and Seaweed on bass guitar.

1999 The trio went into the studio and recorded their third album "Songs From the Recently Deceased" This was in comparison a far more horror themed album.

Also during this time, 3 7inch limited singles were released. The first, commonly referred to by fans as "Hello Horray" a split with The Spook, was in both Germany and the USA. Both release featured a different front cover and the US edition came with a sticker. Also released the same year was 197666 limited to 500 copies and containing the rarely heard track "Hey Mom I Just Killed a Chicken".

During this time keyboardist Ikky was brought into the band, but Sicko Zero was uncomfortable with this and soon left for the second time.

2001 Scabs the drummer who replaced Zero the first time around in 1997 was brought into the band to replace him once more. Although the band still wore make-up during this period, they removed their wigs and began to adopt an image which would later be seen in the Murderdolls.

The Frankenstein Drag Queens From Planet 13 recorded their fourth album, "Viva Las Violence". This time around the sound was more hard rock centered, but with some shades of their "Night of the Living Drag Queens" album remaining. Seaweed recorded on the album but had left by the time it was released. A local bassist replaced him, named "It".

In support of the album, the band played many shows, and recorded some songs which would later appear on a Greatest Hits compilation. The band played their last show in Atlanta, Georgia during early 2002 and were folded by leader Wednesday 13.

Wednesday 13 joins the Murderdolls 13 had been asked to join a band named the Rejects, by two musicians from Des Moines, Iowa named Dizzy Draztik and Joey Jordison, the latter of which played in a world famous band called Slipknot. 13 felt that after six years and four albums, the Frankenstein Drag Queens were not garnering much success and wanted to try a new project.

On November 2001 Wednesday 13 joined the Rejects as a bassist. By the time 2002 had hit, Draztik was out of the band, 13 was the frontman and they have a new name, the Murderdolls. He would use many Frankenstein Drag Queens From Planet 13 songs on the Murderdolls debut album "Beyond the Valley of the Murderdolls". This would cause relationships to fray, between 13 and former members of the Drag Queens, who had formed a new band themselves; The Graveyard Boulevard.

After Murderdolls went on hiatus, Wednesday 13 put out a new song called "Your Mother Sucks Cocks In Hell" on a compilation album for Metal Sludge. He would then release a greatest hits album under the name Wednesday 13's Frankenstein Drag Queens, featuring a few new songs. The frontman then decided to put the band to rest and began to record under the Wednesday 13 name.

Frankenstein Drag Queens reformation Shortly after this, 13 and his former band mates in The Graveyard Boulevard patched up old feuds (With the exception of Seaweed) and decided to bring the Frankenstein Drag Queens back, as a part time project. They official reunited on stage in Greensboro, North Carolina on August 20, 2005. The line-up featured Wednesday 13, Abby Normal and Sicko Zero, but they broke up again due to a dispute about money from "Little Box of Horrors".

They released a 10th anniversary box-set in May 2006, titled "Little Box of Horrors". The box-set features almost every song the band has ever recorded, with alternate versions of some songs, and a DVD which features footage from a 1998 concert. It was released on Restless Records.

"Chop Off My Hand / Hey Mom, I Just Killed a Chicken"

"Love At First Fright / I Wanna Be Your Dog"

"Sweet F.A, A Tribute to Sweet" (featuring cover of "Fox On The Run")

"Thinking Of Alice, A Tribute to Alice Cooper" (featuring cover of "Levity Ball")