Fuck It, We'll Do It Live 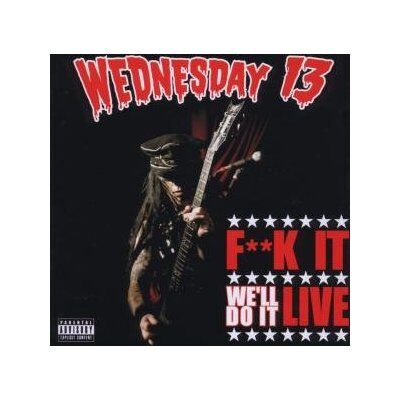 Fuck It, We'll Do It Live is the first live album/Dvd by American horror punk musician Wednesday 13. It was released on November 14, 2008 through Hot Topic locations in the United States. The album contains a live performance recorded at the Crocodile Rock in Allentown, Pennsylvania earlier the same year. 13 has asserted that no post-production overdubbing will occur in the studio, and admits, "If we make a mistake, you will hear it. If my voice cracks, you hear it. This is as close to a live experience as we could give." The title of the album is most likely a homage to Bill O'Reilly's lost videotape from Inside Edition, where he shouts "Fuck it, we'll do it live!" after being frustrated by technical errors on the show. One strange thing is I Walked with a Zombie is not included on the album, tho its one of wednesday 13s most popular songs, and often played as an oncore.

In a recent interview with SF Weekly, Wednesday 13 spoke about his current touring band. "This is like my favorite lineup that I've ever had, and I've definitely had members come and go for many different reasons over the years, and not all have," he said. "It kind of sucks because every time you get a different band member, it's way beyond crazy a lot of the guys that I've played with are guys that are front men of their own bands and they want to break up — which has been, I would say 90% of the cases with most of the guys I play with who no longer play with me anymore — to do their own thing. Right now, the longest-lasting member in our band who's still in the band now is Nate Manor on bass. We have Jason Trioxin on guitar, and Johnny Henrich on drums. We're back to a four-piece because I'm playing guitar again, 'cause my collarbone is healed from my accident last year. I had to give it up there for awhile. I had a car accident last September, flipped my car five times and broke my collarbone, so... we were always a four-piece and I always played guitar, but I had four solid months where I had all these tours booked, and I went on tour and it never healed up, so I had to have an extra member come and play guitar and I just had to be the frontman for awhile."[1]

"Not Another Teenage Anthem"

"From Here to the Hearse"

"Till Death Do Us Party"

"House by the Cemetery"

"Put Your Death Mask on"

"Runnin' Down a Dream" (Tom Petty and the Heartbreakers cover)

"Look What the Bats Dragged in"

"Faith in the Devil"

"I Love to Say Fuck"