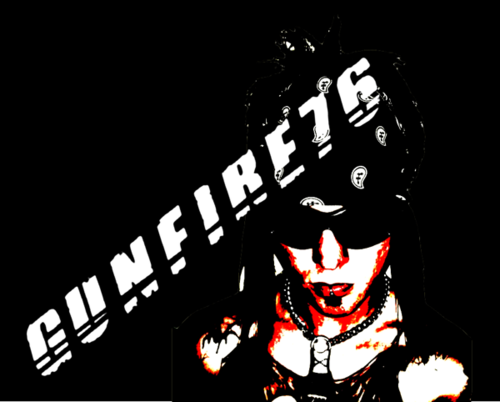 GUNFIRE 76, the new project featuring former MURDERDOLL frontman Wednesday 13, will enter a Los Angeles studio on July 1 with producer Howard Willing to begin recording a full-length album. According to a press release, the CD — which will feature material written by Wednesday and Todd Youth (DANZIG, D-GENERATION, THE CHELSEA SMILES) — will have "more of a rock sound."

"GUNFIRE 76 will be my extension into the rock world," says Wednesday. "After touring with THE CHELSEA SMILES, Todd Youth and I would find ourselves discussing the bands we grew up on and decided to put a band together that fits more of the rock and roll sound of KISS, DEAD BOYS, NEW YORK DOLLS, THE STOOGES and the in-your-face rock n roll sound. Not being signed to a record label allows me to create new projects and continue growing as an artist."

GUNFIRE 76's debut is set to be released in October. The band is currently setting up a tour for late 2009.

The CD will be self-released in the the U.S. and Wednesday will partner with a company for overseas distribution.

"GUNFIRE 76 will be on tour this year," says Wednesday. "We are currently booking a U.S. / U.K. tour for the end of the year with BULLETS AND OCTANE. I have always wanted to tour with those guys, but the WEDNESDAY 13 music never fit their rock and roll style. Together this should be one great rock show!"

The aforementioned road trek begins November 11th in Austin, Texas. “Being that this record is only 11 songs and I’m going to be touring on this for a while, I can’t just play 11 songs; there’ll definitely be stuff from the past. I’m not really going to do the horror rock songs. Over the years there have been other songs I’ve done like ‘Bad Things’ and ‘I Love To Say Fuck’ that have nothing to do with horror movies but still have that rock style. So I’ll be pulling out some of those as far as the live show goes. It’s a new band but you’ll still hear some classic stuff from the past. This Gunfire thing is something I’m going to be doing as my priority for probably the next year and a half or two years. I won’t be doing any Wednesday solo stuff.”

As for the moniker Gunfire 76… “We just came back from Japan. We had three days off in The UK before that last Wednesday tour started. I was in my hotel room in London, sitting at this little desk, just scribbling down names and different things. I don’t know where the Gunfire thing came from? I might have written down fire and gun and somehow it just came together. But the 76 thing is, I was born in 1976 and one of my fan-favourite songs is one I recorded with Frankenstein Drag Queens and Murderdolls, ‘197666’. The Gunfire thing, I was pissed off. I wanted to do something new and it lit a fire under my ass. Gunfire 76 just fit. When I wrote it down and looked at it, it looks cool and sounds cool.”

Retrieved from "https://wednesday13.fandom.com/wiki/Gunfire_76?oldid=3779"
Community content is available under CC-BY-SA unless otherwise noted.