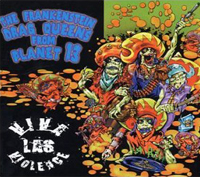 Viva Las Violence is the fourth studio album of North Carolina horror-themed punk band Frankenstein Drag Queens From Planet 13. It was released on November 6, 2001, on Century Media Records, in collaboration with People Like You Records. It is considered to be their most successful album, and was dedicated to the late Michael "Spider Trash" Patrick. It is featured in the 2006 box set, Little Box of Horrors.

It: Bass (Actually credited for "Mutilations, Monsters, Mayhem and Madness" in credits)

Retrieved from "https://wednesday13.fandom.com/wiki/Viva_Las_Violence?oldid=3359"
Community content is available under CC-BY-SA unless otherwise noted.