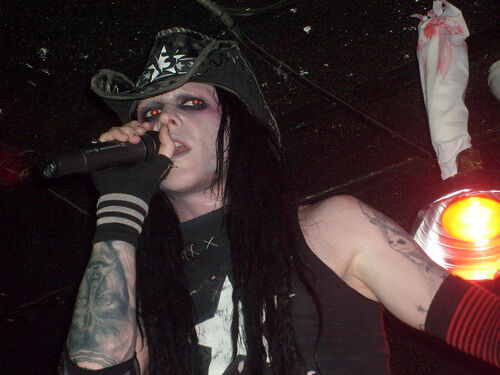 Wednesday 13 born Joseph Poole, August 12, 1976, is a rock musician from Charlotte, North Carolina. He is most famous for his role as the frontman of the Murderdolls. He has also played in several other bands, including Psycho Orchestra, Maniac Spider Trash, the Frankenstein Drag Queens From Planet 13, Wednesday 13 and Bourbon Crow. Poole currently resides in Landis, North Carolina, he lives with his wife Roxanne and his daughter Zoie. Poole is a huge fan of Horror movies and macabre TV shows such as The Munsters and The Addams Family (the Munsters address 1313 being the source of his "13" moniker and Wednesday Addams his "Wednesday" moniker), which have influenced his lyrics greatly. He also produced his first Dvd:Wednesday 13's Weirdo-A-Go-Go wich was released February 5, 2008

Poole's musical career began in 1992 when he played guitar in the band Mizery which later became Psycho Orchestra. Poole left that band to be the lead vocalist and form Maniac Spider Trash. From 1992 through 1996, he fronted the band, despite never reaching a degree of success. The band released one EP, Dumpster Mummies, before disbanding. Poole went on to form the Frankenstein Drag Queens From Planet 13.

Between 1996 and 2002, the Frankenstein Drag Queens From Planet 13 released five studio albums and six EPs. The band broke up in 2002, around the time Poole was drafted by Murderdolls guitarist Tripp Eisen to front the side project, which enjoyed much more success than that of his previous bands.

The Murderdolls released an EP and one studio album, Beyond the Valley of the Murderdolls, before announcing an indefinite hiatus. After this, Poole began performing in a solo band. Wednesday released his first solo album, Transylvania 90210: Songs of Death, Dying, and the Dead during summer 2005.

In May 2006, the Frankenstein Drag Queens From Planet 13 announced their reunion, which was followed by a tour with one of Poole's idols, Alice Cooper, and a box set of the band's discography, entitled Little Box of Horrors. However, the band remains mostly inactive, as Poole has kept focus on Wednesday 13 and an outlaw country side project, Bourbon Crow, which he uses the name Buck Bourbon in.

In early 2006, Wednesday released Fang Bang, a seemingly happy album in comparison to his other works.

In February 2008, a DVD, titled Weirdo A-Go-Go, was released by Poole. This was followed months later by the band's third studio album, Skeletons, as well as a complimentary EP entitled Bloodwork, which were each self-released on April 29, 2008.

In October 2008, Wednesday 13 released his first Live cd/dvd entitled Fuck It, We'll Do It Live. He is currently on tour in support of Skeletons

His fourth studio album Calling All Corpses is due for release on October 11th 2011 in North America and October 10th overseas.